A personal statement from Karl Dallas 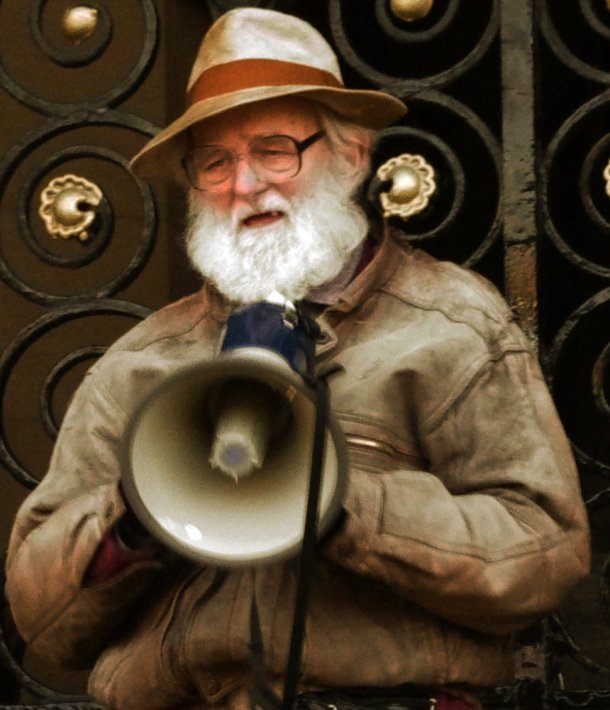 ‘They don’t like their presenters to be political, old man. Simple as that.’

In 1982 I was kicked off my British Forces radio programme because of my opposition to the Falklands War. Oh, that wasn’t the official reason. The establishment doesn’t work like that.

The mandarins at the BFBS just said they weren’t renewing the contract for my monthly jazz show. But privately, people said that was the reason. As I browsed the record library choosing music for my last appearance on air, my fellow BFBS presenter, Alan Freeman, tapped his nose. “They don’t like presenters to be too political, old man,” he said. “Simple as that.”

Of course, they couldn’t complain of me spreading disaffection among the lads putting their lives at risk for the greater glory of Maggie Thatcher. I’m too professional to mix business with the politics. But I was off the air, until I found a home for my little show on my local community radio station.

When I stood as an anti-war candidate in the local elections after going to Iraq as a Human Shield volunteer in 2002 I accepted that I couldn’t also broadcast, which was cool. Likewise when I campaigned for a General Election candidate five years ago (he got in).

I’ve just got back on air after a few months off because of sickness. I’v e just received guidance on  what I can and cannot do between now and 10pm on May 7. It reads:

Now anyone who knows me politically knows I am not enamoured of the bourgeois political system. Like Ken Livingstone said, “If elections changed anything, they’d be banned.” But also, so many of our predecessors fought and died for the right to vote, I believe it is our revolutionary duty, if we are not just playing politics for show, to take an active part in elections.

Now, currently I’ve been presenting three shows on air: a jazz show, a classical show, and a film show. Except in the sense that politics informs everything I do and say, I would never use either of them to push my views down listeners’ ears. I stopped presenting a talk show because I had to keep abstaining from comment, because my job, as presenter, was to facilitate the views of my guests.

But it’s been explained to me that the Ofcom code doesn’t allow me to be on air at all if I am involved in any shape or form in the electoral process. Fair enough, I can’t say on air, “Vote this way or that”. But if a candidate says something stupid, nor can I Tweet about how stupid s/he’s being. If someone says something I agree with, I can’t re-Tweet the statement.

The bit I really have problems with are the words “election issue”. As an Anglican Christian I am not able to declare my solidarity with the Archbishop of Canterbury when he has a go at the Tories for the way food poverty is spreading. A few years ago I put out a leaflet with the heading VOTE FOR JESUS. I might put it out again.

I know lots of people think that all politics are a waste of time and they don’t intend to vote. I am a member of the Unite trade union, which is running a campaign telling people to register to vote (you can do so up to April 20: send a message to votebooster@unitetheunion.org to find out more).

I intend to play an active role in this campaign. If that ain’t an ELECTION ISSUE then I don’t know what is.

But because it’s an election issue, |I’m coming off the air, temporarily. Hopefully . . . God willing . . . insh’Allah, I’ll be back on  the air with my Modern Masterpieces classical show in May, likewise Swing Easy.

With a more humane government in power. You know it makes sense.