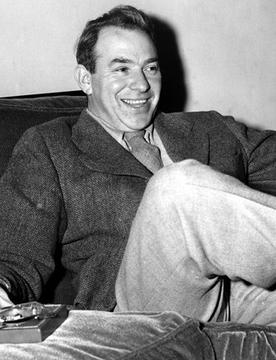 The songwriter, Edgar Yipsel “Yip” Harburg (Isidore Hochberg,  1896-1981), composed 681 songs, wrote the tunes for 20 musicals and his music was included in over 300 TV shows and movies, most notably The Wizard of Oz. As well as the songs, he wrote much of the dialogue, including the entire scene in which the Wizard awards the heart, brains, and courage to the tin man, the scarecrow and the cowardly lion.

As a boy Harburg attended Townsend Harris High School, where a fellow student was George Gershwin’s brother (and later, lyricist) Ira. When Yip’s electrical business collapsed after the stock market crash of 1929, Ira suggested he should try lyric-writing and his first song, Clicking the Clicker Ticker, appeared in Earl Carroll’s Sketch Book on Broadway, “A Musical Revue in Two Acts”, which went on to 392 total performances in three different theatres between July 1, 1929 and July 6, 1930.

His first nationwide hit was Brother Can You Spare a Dime, which he wrote for J.P. McEvoy’s New Americana revue in 1932. Someone had written the lines “I could go on crying big blue tears” for a tune which composer Jay Gorney (who went on to discover Shirley Temple, and whose daughter starred in the Saturday Night Fever movie) had learned as a lullaby from his Russian mother.

Harburg wrote his new words for a scene featuring soup kitchens for unemployed workers, and it went on to provide nationwide hits for Rudy Vallee, Bing Crosby, and Al Jolson, on the eve of FDR’s election  to the White House.

In 1933, Jay Gorney brought him in as songwriter in the Universal Studios movie, Moonlight and Pretzels, which he had written for Karl Freund. Harburg continued to write lyrics for Hollywood musicals, producing such popular songs as It’s Only a Paper Moon (written originally for an unsuccessful Broadway play called The Great Magoo, set in Coney Island, and subsequently used in the movie Take a Chance, in 1933), April in Paris (composed with Vernon Duke in 1932 for the Broadway musical Walk a Little Faster and featured in the 1952 musical film starring Doris Day), and Old Devil Moon (Finian’s Rainbow – 1968).

Despite the social commentary implicit – and sometimes explicit – in many of his songs, Yip Harburg rarely encountered problems in his musical career until the McCarthy era, though his song Ain’t It The Truth expressing religious scepticism was removed from Cabin in the Sky (he was a committed socialist, and lifelong atheist). When he was blacklisted in Hollywood, he concentrated on Broadway musicals, culminating in his most successful show, Finian’s Rainbow. When Harburg refused to testify before the House Un-American Activities Committee a planned animated version of Finian (featuring performances by Frank Sinatra, Ella Fitzgerald, Oscar Peterson, and Louis Armstrong) collapsed, but the movie musical version eventually surfaced in 1968.

In 1970 he composed the words I’ve Grown Accustomed to Disgrace, a parody of the Lerner & Loewe song   from My Fair Lady.

Harburg was inducted into the Songwriters Hall of Fame in 1972.

On March 7, 2001 the results of a poll conducted by the Recording Industry Association of America and the National Endowment for the Humanities ranked Judy Garland’s rendition of Over the Rainbow as the Number One recording of the 20th century.

On June 22, 2004 the American Film Institute broadcast a TV special devoted to 100 Greatest Film Songs in which Over the Rainbow was Number One and Ding Dong! The Witch Is Dead was Number 82. The latter song topped the UK charts on the death of Margaret Thatcher in April 2013.

In April 2005, the United States Postal Service issued a commemorative stamp recognizing his accomplishments. The design included a rainbow and lyric from Over the Rainbow.

♦ Please enter your details below if you are interested in learning more about this project, including access to the password-protected scenario.